Watch me on Twitch!

Streaming whenever I can.
(Sorry, that's the reality of working at night. Subscribe to my channel to get notifications!)

There's only so little I can say about a game devoid of all creativity. This WiiWare title... is not devoid of all creativity, there was a good idea at first... but then you see how it's handled, and... Urgh. Look. Bad ideas can be done in a way that they seem fine. You can't make something amazing out of something awful, but you can still do something of very relative quality if you are careful.. On the opposite side of the spectrum, there's ideas that seem creative at first, but which are handled so damn poorly that the results are just not very good. This... fits in the second category.

This is Bit Boy. It reminds of many different things, notably Pac-Man. I'm not a Pac-Man fan, though its influence on the gaming world is undeniable. However, Pac-Man wasn't bad, it was challenging, but you had to be really persistent if you wanted to beat all 255 levels. Sadly, not all imitations are good. This one is... indeed, bad. But it's hard to describe... I'd say the best way to show how bad it is... well... it's to describe how the game goes, as usual.

Should you buy it? Or should you skip this one? We'll see.

This review is huge! If you need to catch up, read Part 1 here and maybe Part 2 here.

Hello again! This is Part 3, Last Part of this review! Yeah, we've had all sorts of stuff so far: Crazy dungeons, amazing moments, cool tools, lots of traveling, new allies, yeti love... We even got to see a previously respectable villain go insane and be killed by the real villain. And now we're drawing closer to the end of the story. However, before I cover the end of the story, I must first list the many side-quests and additional missions that are located all over Hyrule.

First off, the main side-quest for most Zelda games: The hunt for Heart Pieces. To those unaware of it (as if there were any), the Legend of Zelda series work with Heart Points. Each time Link gets hurt, he loses an amount of hearts. And when he picks up a small heart from the remnants of his enemies, he regains a heart. Heart Pieces are rare items that Link must hunt down through all of Hyrule. When he picks up a few of those, he gains an additional heart. He gets a full one aftet every major boss, and then others are scattered over Hyrule. This has been a staple of the series for a while, so it's not a big surprise.

What else is there to do in this great big world, now? Well, I don't know if you remember the dungeon on the Arbiter's Grounds, at the end of Gerudo Desert... To reach the second half, Link had to find and defeat four Poes hidden in the dungeon. As it turns out, a rich man turned into a golden statue needs your help. He's stuck in his house and he wants Link, in wolf form, to find and defeat sixty Poes scattered throughout the world. To defeat a Poe, Link – as a wolf – must see him with his senses, bring it down and then bite it to pull its Poe Soul out. Wow, this game is getting darker every day... And before you ask, no, it cannot be done in a more peaceful way. Those damn ghosts are defeated only when you rip their souls out.

When you bring all the sixty Poes to the guy, he is freed from his golden statue prison. He runs out... and gets dumped by his girlfriend, so he goes to mope in the tavern, where he wastes all his fortune on whoever asks for it. That's how Link can get 200 Rupees each time he goes to visit him. You really gotta wonder why he wanted to be richer. Or, Heck, why he asked to some evil creature when he could just had explored around Hyrule. Do you have any idea how many Rupees I collected?
Read more »
Posted by Nicolas at 7:00 AM No comments:

Part 1 can be read here.

Welcome back! Are you ready for this week's episode? I'd love to talk about all kinds of stuff in my intro, as I usually do, but this plot is so damn long, I don't have time for that! Let's jump back into the story of Twilight Princess! 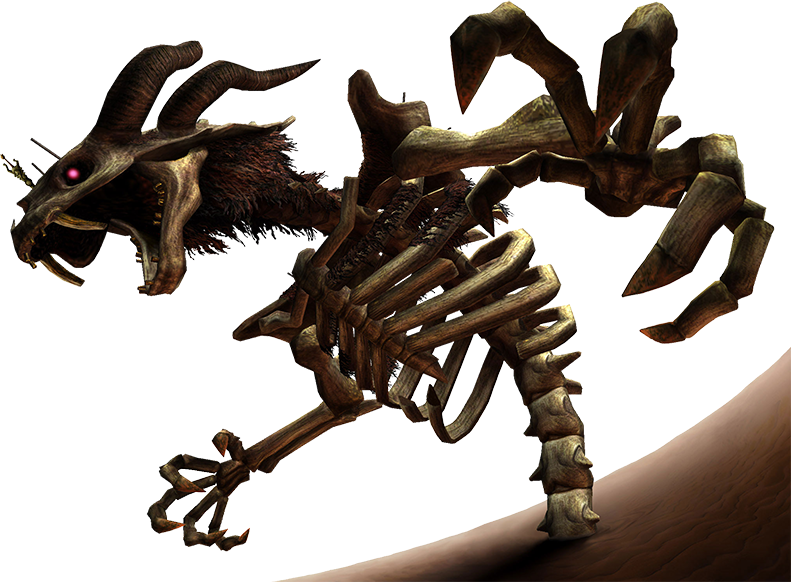 Where were we last time... Oh yeah, the Arbiter's Grounds. In Gerudo Desert. Link is hunting for Poe Souls in the dungeon. Right. He finds and defeats four ghosts that he can see only in wolf form, and accesses the midway point in the dungeon, where he battles the scary Death Sickle, a blade controlled by an invisible ghost. Once this monster is defeated, the Hero of Time gets his hands on... The SPINNER! Awesome! More dungeon crawling happens after that point, until Link reaches the Twilit Fossil Stallord, one of the most awesome bosses and one of the best boss fights in the game. It starts off normal enough, with Link having to break the beast's vertebrae with the spinner, but then it takes a turn for the crazy with the second part of the battle, which is just incredible. Watch for yourself.

Hey everyone! You may have noticed a lack of content this Monday. Yeah, I would have written an Editorial-style post, but I either A) felt lazy, B) couldn't find a satisfying subject related to The Legend of Zelda, C) have been working a lot because of my last weeks as an intern, or D) all of the above.

The answer is D. Though C is a close second. And then B. But yeah, I'll be extremely busy now, maybe even more than usual. So I might have a few problems keeping up with the schedule. I mean, you're still going to get a review per week or at least part of a review; Twilight Princess is separated in three parts after all), but I'm probably gonna cut off the Editorials and Fun Stuff articles. If you see one, it's because I got creative or something. Yeah, I'm sorry, that's how the cookie crumbles, that's how the ball rolls.

However, this does not mean the end of Planned All Along! Oh, Hell no! I'm gonna keep going. Here, get closer, I'll give you a few hints that it's not over:
-After Twilight Princess, I'll have another review and a Top 12, and then I will review my last Game Boy Advance game. Yes, finally the last one! It's about time, huh?As such, I'll be showing extreme geekiness by reviewing a video game about a manga, or maybe about an anime, which is about a card game. You probably guessed it by now. Still, I expect that this review will be one of my greatest, maybe the second greatest after Twilight Princess and before Pokémon FireRed.
-However, something even MORE important: The blog's first anniversary is coming soon! July 19th, 2013 is the day this blog was created. I expect major changes around here: A re-design of the title, a re-design of the site's colors (purple is good for a while, but it gets kind of old after a while), a re-design of some pages... Yeah, I want to make it big.
-And another way to make it big is to dedicate the month of July - or at least a part of July - to an enormous review, or a very special theme month. Here is a list of games and themes I really want to review someday, but I know they'll be very long. However, there's four options, and I really have no idea which one to do. This is why I'm turning to you, my readers. Here's the list.

What do you think I should review for Planned All Along's first anniversary?


Note that for any of those choices, a Top 12 could also occur depending on the schedule.

But that's not all! Sign up now and you will also get- No wait, wrong thing. But that's still not all! In my ever-increasing desire of giving more to my readers - and my fans! - I decided I'd add something new to the blogs. Yes, there's still the Extras section, but for the moment it's kind of empty. But should I add something more? Here's.... another poll! What should I add to the blog to make it more alive, more entertaining? Take a pick among these choices!

Out of those, the forum is the easiest one to do, but that doesn't mean it's what you want. Anyway, I hope you'll reply to this post, and I hope you'll like the changes that Planned All Along will go through on July.

Thanks for reading, and I wish your month of April is less busy than mine!

Posted by Nicolas at 6:42 PM No comments:

Labels: Other
Email ThisBlogThis!Share to TwitterShare to FacebookShare to Pinterest

I crack my knuckles. I do some exercise. Hop, hop, hop, some Just Dance 3. Today is a big day. Today begins another epic on Planned All Along. I'm gonna need all the strength I can get. Hop! Hop! Hop! Let's go! I prepare my sword, my shield. I put on the green tunic. With beige-ish pants, please. And the boots and the hat. Don't forget the plastic things people put over their ears to look like Vulcans. Okay, I'm ready.

Can I make jokes about it? Not to be overly confident in my abilities, but... yes. Yes I can. It's not gonna be a walk in the park. There will be scares, there will be hard times, but I can do it. I said it. BRING IT ON!
Read more »
Posted by Nicolas at 6:01 AM No comments: